This little story was written by my father, Michael P. Moriarty – 1900 – 1972. He spent his days working with his hands. He spent his off time spinning tales from and about his native Ireland.

How and why the Irish got the brogue

Brogue: The pronunciation or accent peculiar to a dialect, especially that of English, as spoken by the Irish

St. Michael is known as the “keeper of the keys, or gatekeeper” of Heaven 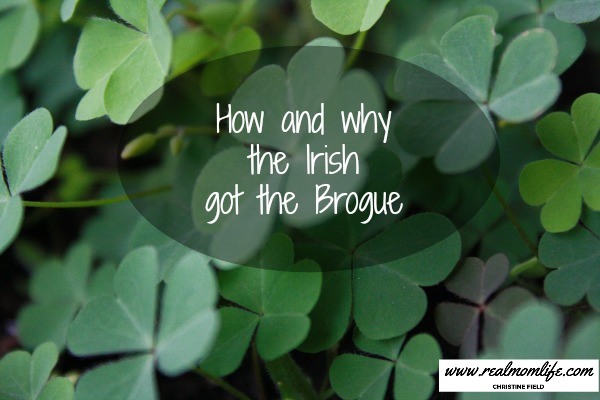 After the death of St Patrick in 460 A.D., his name became a household word, and world famous as well. Because Ireland was the only country in Western Europe whose conversion produced no martyrs, we can readily understand the great joy and welcome that awaited Patrick in Heaven. In fact, the clout and influence he wielded there became so tremendous and awe-inspiring that in order to gain admittance through the Pearly Gates, all one had to say was, “I’m Irish,” and immediately the welcome sign was out and the gate was swung open.

After several years an election was held in Heaven, and new Trustees were appointed for the Entrance Bureau. Believe it or not, their first act was to introduce the Census – counting and recording the nationality of all the people in Heaven. It proved to be a long, drawn out, and tedious job. Finally, it was completed and then came the sensational discovery – 99% of the Heavenly inhabitants claimed to be of Irish descent.

“Unbelievable. Preposterous. Impossible,” the Trustees shouted. “How can millions and millions be Irish – leprechauns, yes, but people, no. Something is wrong up here. What shall we do about it?” they asked, perplexed and dumbfounded.

They consulted world famous judges, astute lawyers, and expert accountants, but sad to say, nary a one of them could offer a suggestion or a solution. And so they decided to wait another hundred years with the sincere hope that somebody would come along and solve their problem.

Then it happened. An American professor of languages checked in. They consulted him. He thought and thought, and suddenly came up with the answer – how about giving the Irish an accent or brogue that would quickly and easily identify them?

The Trustee’s were elated. The intricate question that had dazzled the Heavens for years was solved satisfactorily. And they rewarded the popular professor with a brand new pair of shiny wings. They appointed a new gate man, named Michael, who was smoking a clay pipe and sporting a look of complacency on his Irish rugged face. In happy anticipation, they awaited their first visitor.

The gate bell rang lustily. Michael sprang to his feet and in a husky voice asked, “Nationality, please?”

The visitor was all smiles. Any why not. He was telling himself – this is easy. Nothing to it at all. Just said the magic words, I’m Irish, and you’re in. This was going on for years. Messages were dropped from Heaven now and then, and the people on earth knew the score.

“I’m H’Irish,” he said with confidence.

The door man laughed hysterically and called to the Trustees on the inside. “Come out ye guys and hear this brogue. It’s for the birds.”

The visitor became highly agitated now. “What … what happened?” he asked, bewildered.

The gate man explained the bestowing of the brogue on all the inhabitants of Ireland, and added, “You ain’t got it, buddy me-boy.”

“Well, are you going to give me this ….. this brogue?” the visitor sputtered.

“That I will now. Turn around please.”

Giving the visitor the brogue (boot) in the derriere that shot him spinning into outer space, Michael commanded, “Never darken me gate again, ye spalpeen of an imposter.”

And that’s the whole story.