This time she broke her hip.  Although she was in a ritzy assisted-living facility, the ravages of Alzheimer’s had taken her balance, her wit, her sense and ultimately, her dignity. 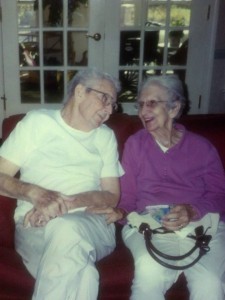 My husband drove the six hours to get there and met up with his sister.  Along with my brother-in-law, the three kept vigil over her, did jigsaw puzzles and told corny jokes.

By the time I arrived, she spoke little.  When she did, it was to utter phrases like, “Thank you, Jesus” and “Thank you God for all the love.”

My sister-in-law recounted earlier stories of taking them to lunch and when it was time to pray over the meal, Mom would remember how to pray and what to say, even though she may not have recognized who you were or where she was.  Her love for Jesus was so hard-wired into her brain and carried so deeply in her heart that even dementia could not dislodge it.

I was so nervous when my husband took me to meet them some 30 years ago.  He told me the wholesome stories of his childhood and of what it was like to be raised by people of deep faith.  It intimidated me.  I was raised a nominal Catholic and hadn’t been walking with the Lord all that long at the time I met these people who were saints in my imagination.

Saints who knew how to laugh, to embrace, to love, to extend grace, and to accept.  They made me feel so welcomed that she called me her daughter-in-love, and I just called her Mom.

His Dad knew my past.  He knew my parents had died when I was a teen.  He came to learn that I have survived through several years of lost wandering, only to ultimately call out to the Lord who healed my heart and lifted my head.   After we married, Dad told me once, “Maybe we can help fill some of that hurt for you.”

Indeed they did.  Family gatherings were warm and fun.  We could laugh and love and still honor the Lord.  This was the first time I had seen that demonstrated.   The family gatherings I only vaguely recalled from my own family were marred by fights, alcohol and dysfunctionality.  This was a new thing – and I flourished in it.

Many memories were shared and relived as we sat by her bed.  Once, the cousins circled her bed and sang hymns and read Scripture.  I had returned home for a time, but watched the video on Facebook with big tears.

Dad, tired and troubled, stayed by her bed and refused to let go of her hand.  That’s how it goes after 67 years of marriage.

My husband called me the night she passed.   It was peaceful, he said.  Being ushered into the presence of Jesus surrounded by love is a good death, if one must die.

After Mom left, Dad stood at the foot of the bed and said, “The Lord gives and the Lord takes away.  Blessed be the name of the Lord.”

And so it is.  He gives and he takes.

In this instance, what the Lord gave was priceless:  A wonderful woman to serve as the ultimate role-model of the Christian life.  Always giving, always caring, always thinking of others.

In the end, what He took was me precious Mother-in-Love, whose life and godly example will live on in the lives of all of us who love her.