A few years ago, a friend and I were going to start an “excuse service.” If you were trying to get out of some commitment, or convince yourself to do or not do something, you would contact our service and we would help you come up with, and implement, an excuse.

It’s a practiced skill. One that takes creativity. Because for every action or inaction, I can think of a million justifications for either one. It’s a gift. 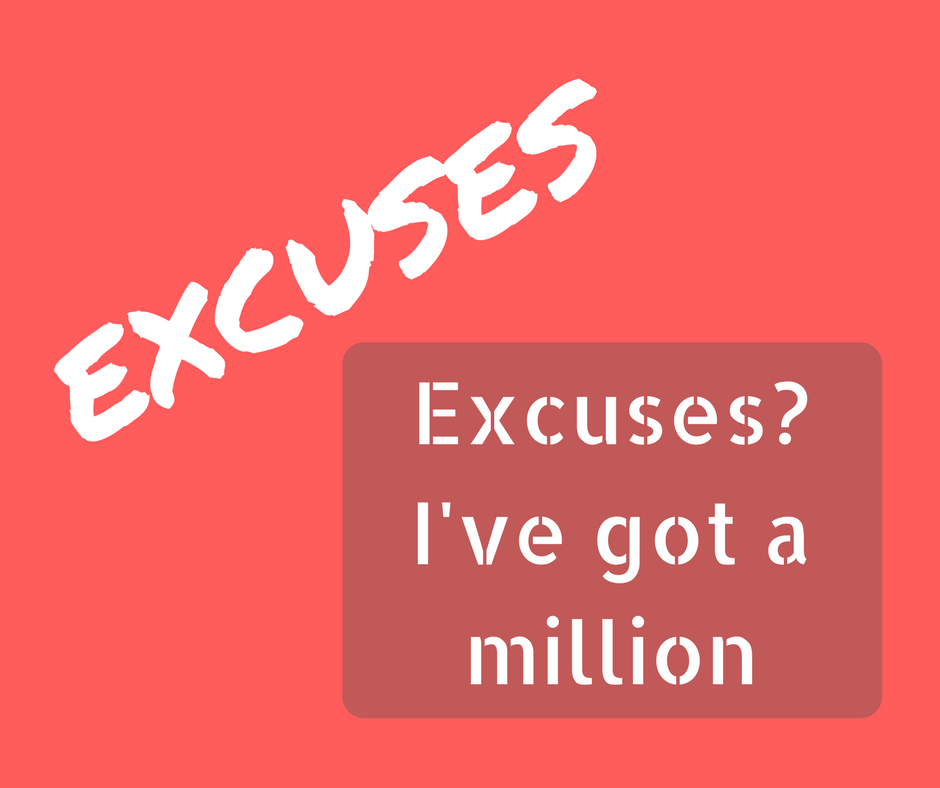 So, I’ve got excuses as to why I haven’t been writing. I have a couple “regular commitments” that can be time consuming and they’ve been consuming a lot of time.

I have always believed that if you were passionate enough about something, you will make it happen. When I was surrounded by kids and activities and homeschooling and freelancing, I managed to write seven books. Most of them were written longhand on a clipboard in the car, at lessons, waiting for kids to get out of classes, and other stolen moments. Whatever it was I had to say was determined to be said. And it was.

And so I am challenging myself. Do I really believe I have anything else left to say?

If you read any of my earlier books, you’ve had a front row seat to leaving my career to be a full-time mother, adopting kids, homeschooling kids, learning to teach kids with learning disabilities and teaching kids life skills. They were rewarding to write and blessed many who read them.

Life has changed so much since those days! Some days, I hardly feel like I am the same person.

But indeed I am. Hopefully wiser, kinder, filled with more mercy and patience.

I have so much more to say and share, but I have a million reasons why I don’t. The reasons are excuses and when viewed logically, they have no merit.

So, I am going to challenge myself – and YOU – to do something you have put off, or have made a million excuses over.

Is it writing a book? Is it taking on a huge project?

I get it. You really want to do it, but daily life presses in and it doesn’t get done.

Everyone procrastinates at one time or another. Sometimes this is not a big deal, because the task you are putting off is not important or time-sensitive. There are sometimes, however, when procrastination can cause serious problems in your life. Unfortunately, constantly putting things off can become a habitual ritual that can cause real damage in a number of ways.

You put household chores off until the last minute, and this creates stress and strain on your mental well-being. At work you put off till tomorrow what you should do today, your boss notices, and you miss that big promotion or get fired. You know you should exercise. Instead, you find excuses every day to wait just one more day, promising yourself that, “I will start exercising tomorrow.” Your health suffers, causing physical and mental discomfort and mounting medical bills.

There are a host of reasons why procrastinating and making excuses can be bad for you. So why do you do it?

Often times delaying the inevitable happens because you have to accomplish a task or take an action which is undesirable. Other times procrastination is not intentional. It happens because you are distracted by the sights and sounds around you. You may also simply have so much on your to-do list that daily and weekly procrastination is part of your productivity game plan.

Why Procrastination Is Bad for You

You may be asking yourself, “What’s the big deal? So I procrastinate from time to time. Everybody does it, and it’s not like it’s creating any problems in my life.”

Unfortunately, that is the sneaky side of procrastination and its effects on the human brain. No one likes to think poorly of himself. So when you procrastinate, you justify your reasoning mentally. You convince yourself that what you put off until tomorrow is justifiable, and your brain backs up that belief to keep from creating stress.

Your procrastination continues, tasks and responsibilities pile up, and eventually you have such a mess on your hands that you cannot deal with it mentally or physically. Your relationships, your health, your mental well-being and your finances can be ruined by the procrastination – justification – procrastination cycle which feeds on itself until you have caused some serious damage in some areas of your life.

Distractions are often the biggest cause of putting things off. Squirrel! I am guilty of allowing the simplest interruption to distract me.

So, I tried to determine if my procrastinating, excuse making was trying to tell me something. I listened to how I felt when I made excuses. You know what I discovered?

Quite simply, I’m disorganized and undisciplined about many things.

My word for the new year is FOCUS. I am going to focus on the activities, relationships and things that make me happy and that offer some return for the effort.

I am going to learn to disregard or discard those that distract and detract.

Will you join me for this? Let’s talk about it over on Facebook.

What have you been making excuses about and procrastinating about?

What can you do to get momentum going?

Previous Post: « Talking About Estranged Adult Children and Some Healing Advice
Next Post: The Surprising Link Between Mental Load and Creativity »