Kids grow to the age when they think they need money.  Each parent has to decide whether or not to pay allowances.

My husband and I disagreed on this issue.  He felt that the children shouldn’t be paid for chores –  that chores are done simply because you live in the home.  I wanted to agree, philosophically, but I was the one who had to listen to the daily requests to buy things and make decisions as to whether to indulge or not. We brainstormed the issue and came up with a middle ground.

Giving a child some amount of money to manage is a training ground.  If they are responsible with $2.00 a week in allowance (or whatever amount you decide on as a family), there is a better chance they will be wiser as they earn money in their lives.

In real life, we hoped to imprint the connection that work was done in return for compensation.  The Bible says, “If a man will not work, he shall not eat.” (2 Thess. 3:10, NIV)  If one of our children did not do what was expected of them, they were not paid their allowance.

We wanted to make that concrete and real for them.  We also sought a way to work on attitudes as well as work expectations.  It was of no joy to any of us to have an orderly house, but miserable inhabitants.

And so was born a system we called FIELD BEANS. 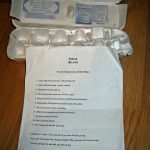 In our family at the time, we started with each child beginning the week with a potential of $3.00 in their account.  Each day, according to how they conducted themselves, they earned the right to keep 50 cents, calculated at the rate of 5 cents per bean.

Each child started the day with ten beans.  In order to KEEP all ten (and keep the 50 cents they represented), they had to be faithful to do certain tasks.  If they omitted a task, they lost a bean.

At that season of life, to earn 10 beans a day, the child had to do these things:

4.  Do all schoolwork, homework, AWANA, piano

5.  Keep room neat and clean (Includes UNDER beds and furniture)

6.  Keep laundry off floor/Put away clean laundry when asked

7.  Have a quiet time: prayer and reading

8.  Afternoon/evening pick-up of house and bedroom

9.  Be kind to others at all times

10. Have a pleasant attitude

The child would lose one bean for each task they omitted per day.  At the end of the day, we would transfer the earned beans from one side of the egg carton to the other.

Their amount of allowance at the end of the week totally depended on their cooperation – and attitude.

Of course each family decides on the dollar amount, or bean value.  Each family also decides what to prioritize in the ten requirements for the week.  This was a very motivating system for my growing children.  They were at the ages that they wanted to have some money of their own.  This gave them money, but it was tied to very specific expectations. We used it to work on attitudes, such as unkindness or harsh talk to one another.  It was also a great idea to put an end to the ceaseless nagging about brushing teeth in the morning!

How could you use this in your family?  How about marbles instead of beans?  Jars instead of egg cartons?

Let me hear how it works for you!