I’ve never been to Washington, DC.  Just hasn’t been on the radar screen. 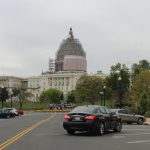 When we went to Maryland last week for the funeral, hubby suggested we swoop down into DC to have a look-see.  It was intended to be a quick drive through and I took some bad photos from the car.

Now, I can say I’ve been to Washington and it’s a wild and crazy place!

The entry was through Georgetown – what a yuppie area!  Scads of young people carrying their Starbucks while visiting yuppie stores.  It was good to see young people spending money. 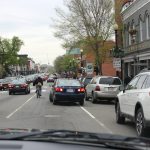 The first thing I saw was a small group of marchers in a group carrying a huge log.  They didn’t have a sign or anything but seemed to be chanting something.  Couldn’t hear what the words of the chant were, but man that log was huge!

In another area, a single guy with a megaphone was singing something in front of a cop.  The cops kept an eye on him while trying not to listen to whatever he was complaining about.  One-on-one policing.

I saw another yuppie who was in the process of rolling up protest banners.  His day’s protesting done, he was headed home.  Probably to Georgetown.
In a small city park, the maintenance service was cleaning up after some event. Wonder what they were protesting there?
Scattered everywhere were earnest tourists looking around at the symbols of all that this country is about.  Huge tour busses coughed at every intersection.
I saw two World War 2 two vets getting off the bus to go see their war’s memorial. There aren’t many of those folks left anymore. 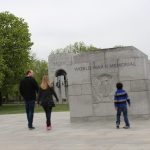 There were people camped at supreme court building.  I presume they were waiting their chance to gain entry for the marriage arguments which were heard the following week.  Another man with a megaphone milled among them chanting,  “Jesus is the answer.”  Sure is!
Saw rows and rows of watching and waiting cops – presiding over this mixture of danger and freedom.
There were blocks and blocks of gray bureaucratic buildings and I imagined depressed gray bureaucrats filing in and out to toil away each day. 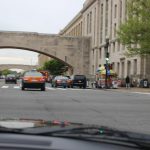 Just blocks from the well kept government area low-income, towering apartment buildings.  DC has an extremely high crime rate.  The center of our governance is a mismanaged, dysfunctional place.
Bet those tour busses don’t go to the poor neighborhoods.
Somehow, amidst the marching and governance and the dysfunction – it works.  We’re still the greatest country in the world.  We each have a say and the freedom to express it.
I’ve been to Washington and it’s a wild and crazy place where danger, dysfunction and democracy all dance together in this wild and crazy place we call America.
Previous Post: « Life and death and everything between
Next Post: Considering Child Adoption? »