GOP nominee Donald Trump has proposed $20 billion in federal funding for school-choice programs.  The funds would provide meaningful choice to families living in poverty, allowing them to send their children to charter, magnet, or private schools, including religious schools.  Trump announced the funds would also be available to parents who make the ultimate school choice – homeschooling.

The response from the homeschooling community has been a resounding … meh. 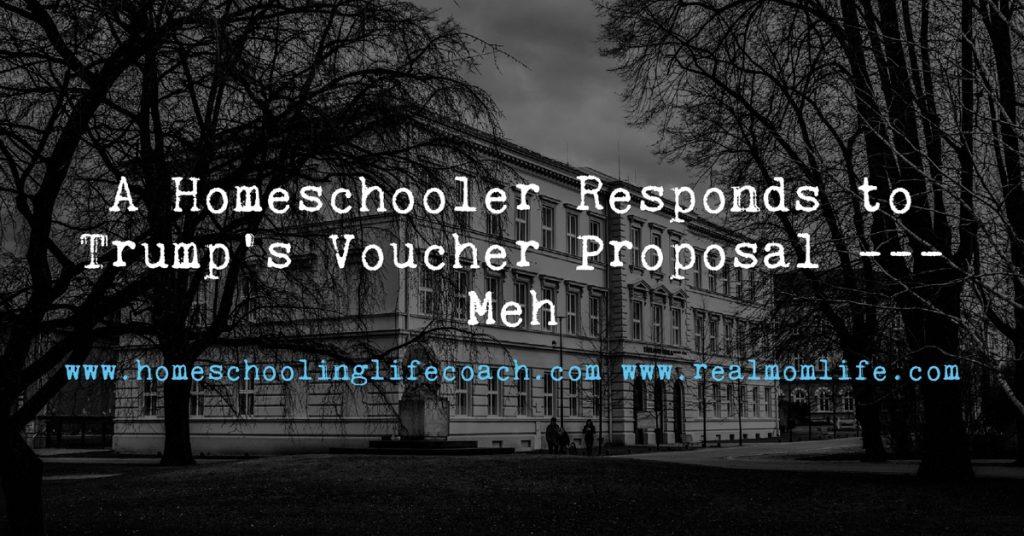 In a recent Politico piece, Trump referred to school choice as a civil rights agenda.  The voucher initiative has met with an unenthusiastic response from homeschoolers who view their educational choice as a parental rights issue.

A voucher system would be income based.  While close to 2 million children are homeschooled in the United States, only 5 percent earn less than $20,000, which is considered the poverty line and the entry point for many eligibility programs.

Most homeschool families are two-parent households, with the father working outside the home and the mother staying at home to educate the children.  This does not describe the demographic that Trump’s voucher program is intended to help.

While we do not know the amount of the proposed vouchers, the dollar figure would have to compensate for all these factors and would be unattainable for most single parents and many working parents.

Despite recent political campaigns promising free everything to everyone, most of us know there is no such thing as a free ride.

The level of regulation of homeschooling across America is geography based.  Some states have little to no regulation.  Others require annual testing and other measures of accountability.

The concept of the government providing money to a family without significant reporting and regulatory requirements is pure fantasy.  Homeschooling parents would have to provide extensive information, be subject to standards like Common Core, and open themselves up to scrutiny of their entire program.

Most families value their freedom to educate how they choose, in the manner of their choice.

Historically, government regulation of homeschoolers has been bitter battle, with homeschoolers holding the position that they simply want to be left alone.

Attorney David C. Gibbs, President of the National Center for Life and Liberty, notes, “Many homeschool families fear that what the government pays for, it will ultimately control.  They are concerned that curriculum and program freedom will be replaced with government mandates in exchange for the funds.”

Acknowledging the difference of opinion even in the homeschool community, he continues, “Other homeschool families think that it’s about time that they be partially compensated as taxpayers for the burden that they are lifting off of the government  school system and these funds are long overdue and should be provided to them with minimal oversight.”

There is a price to be paid for freedom.  Maintaining the fundamental right to control the upbringing of children is a price most homeschooling families happily bear.

One mom in Illinois commented, “My homeschooling is motivated by and infused with my Christian faith.  If receiving a few dollars from the government meant I would have to compromise this, why would I even consider it?”

The strength of private education is its freedom from government regulation. Private institutions, including homeschoolers, are free to believe and behave according to their conscience.  Federal funding would negate or compromise this freedom.

For parents with children caught in the failing public education system, offering vouchers for private schooling is a long-overdue idea.  For homeschoolers committed to family values and freedom from government regulation, most would respond with, “Thanks, but no thanks.”

Note: Several states provide for tax breaks for private education tuition, including expenses for homeschooling.  This has worked well at the state level in several instances.  While the post-tax dollar relief is lower, it is a good start to recognize the very real costs that homeschool families bear.  See The Homeschool CPA  for more information about state tax breaks.