The holiday season brings gatherings with friends and family. Some are enjoyable and fun. Others may be more challenging.

Perhaps there are relationship struggles or sore spots. Maybe it’s someone we have a negative history with. Maybe we’re not directly involved in a difficulty, but we’re affected by it.

With these gatherings, we may be brought into conversations that challenge us.

No matter how hard we may try, there’s just no way to avoid some difficult conversations. However, there are positive things you can say and do to help you handle them better. 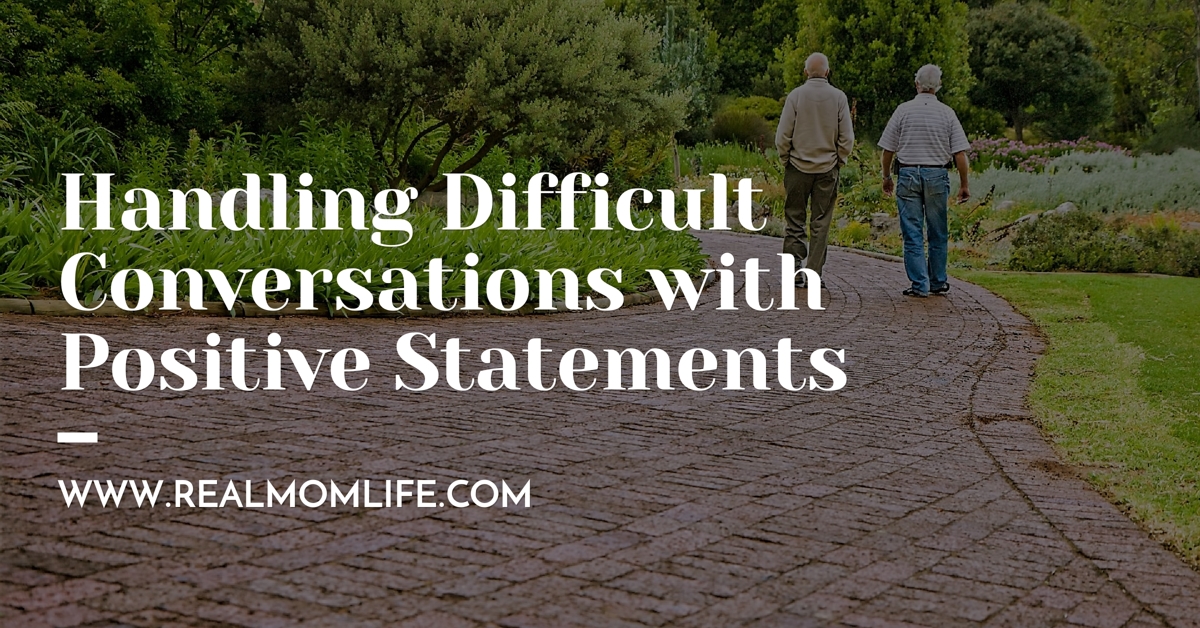 Your first response may be to change the subject when faced with a difficult discussion. This won’t solve the problem or heal the hurt that caused the situation in the first place. It’s better to take a deep breath, gather your thoughts, and face the difficulty now rather than later.

Remember it’s not your job to fix the situation unless you were directly involved. People sometimes just need a friend to listen when they’re going through tough circumstances. They really don’t want you to fix things for them. Being available to listen is sometimes the best way to show your friend or relative that you care.

If the situation requires you to talk with someone going through difficulties, try to put yourself in the other person’s shoes. What would you want a friend to say to you if you were in that situation? In all likelihood, they would like to hear the same thing. Here are some positive ways to handle difficult conversations:

1. Try to help them identify the problem they’re facing. Maybe they’re upset over something that’s not related to the perceived problem. Listen to your friend as they talk, trying to ask questions to help them determine the real problem.

2. Avoid acting like you know what will happen next. If your friend or relative is going through a difficult time in a relationship, don’t tell them everything will work out. Instead, tell them “I’m available to you whenever you want to talk.”

3. Ask general questions rather than expecting them to answer questions they may not be ready to answer. “How’s it going?” is a better question than asking them if they’ve moved out of their home after a breakup. * Let them bring up additional topics when they feel comfortable doing so.

4. Refrain from judging others. Rather than saying you’ve never trusted a particular company when your friend or relative has just lost a large sum of money, you might want to ask, “Is there anything I can do to help?” Most likely they’ll tell you no, but will appreciate your asking.

5. Your similar situation isn’t the same as theirs. While it may be true that you’ve lost a job or a pet, it’s not the same thing as losing a loved one. * Try to encourage your friend or relative to think about the good times rather than their loss.

6. Acknowledge your friend or relative’s  feelings. “I understand that you were hurt by what they said. I would be hurt, too” is better than telling your friend, “There’s no reason to be upset about that.” Acknowledge and validate their feelings, and they’ll feel better.

8. Let others know you understand their point of view. Telling someone, “This sounds important to you” doesn’t mean you’ll go along with what they want, but at least you acknowledge what they believe to be the best solution.

9. Stay focused on the problem and don’t get dragged into a fight. If they verbally attack, don’t take the bait. “I see you’re upset, and I’m sorry. Maybe we should take a few minutes for each of us to calm down.”

It’s important to remember that no matter what the difficult situation happens to be, it’s better to listen more than talk. When you do talk, use the positive statements you find here to help you handle the conversation in a supportive and caring way.

Go into gatherings and parties this season with a listening ear and and open heart. It is a time for togetherness and love, not confrontation and bad feelings.