If you’re like most parents of more than one child, you are probably tired of hearing, “He touched me” or “She’s on my side of the car.” One of my pretty little girls had a bloody nose one time and her older sister claimed, “I didn’t punch her – she ran into my fist.” Siblings don’t always get along. 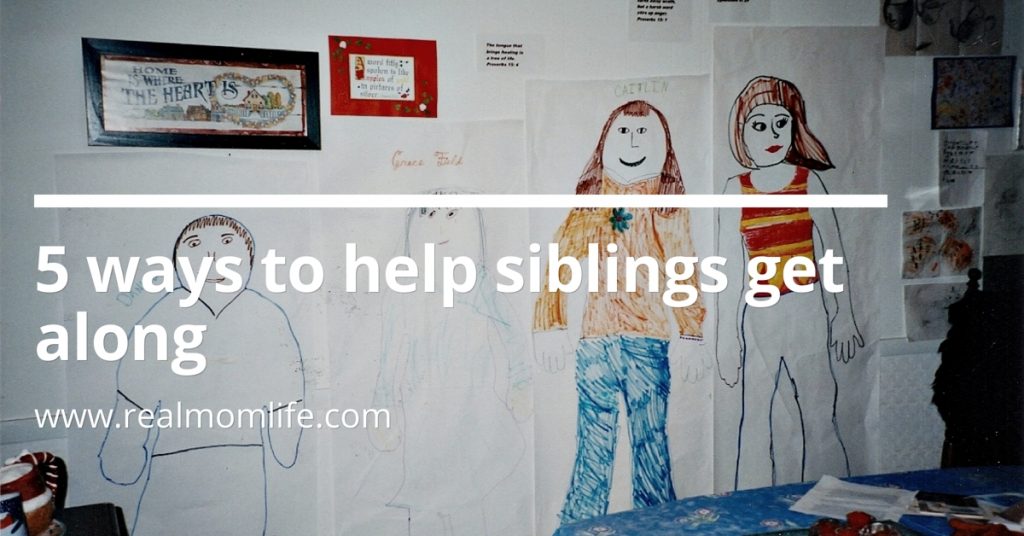 During the holidays especially, you may becoming weary of the bickering and name-calling that are so prevalent with siblings. Even though these ideas are not the only ones parents have come up with, these five strategies for helping siblings get along may be just what you need to get a little peace and quiet in your home during this wonderful season.

1. Establish house rules about acceptable behavior and be prepared to follow through with agreed-upon discipline if they break the rules. When your children know what is expected of them and that you will dole out discipline when necessary, they may be more willing to adhere to the rules better.

Make the rules broad and focused on principles, such as, “We treat one another with respect.” This broad statement cover a lot of situations. It you had a house rule, “No calling your brother a ‘poopy head’,” there would be such limited applicability that you will have to keep adding items to the rules list as the kids think of creative ways to get around them. Three really good starting rules are: We treat one another with respect. We do not touch or harm one another physically. We respond to mom and dad with respect. That’s enough.

2. When the bickering starts, separate the children so you have a chance to talk with each one on their own. Ask them to slowly explain, without calling names or blaming the other child, what caused the disagreement. Acknowledge their feelings and try to understand what is underneath them.

Explain to your children that even though you understand their feelings, the way they handled the situation isn’t acceptable. Are they jealous because their younger sibling gets to do something they weren’t able to do at their age? Are they angry because their older sibling took something away from them? Suggest that they think about what was said and done, how things could have been handled differently and how they can make amends.

Once you have determined the underlying cause, and the children have had a chance to think about things, you can help your children make peace and get along better – until the next time.

In teaching mine to resolve their differences, we have tried many things. Our first house had a cramped, bare, kind of scary laundry room. When the children fought, we told them they would have to go to the laundry room to finish the fight. They never actually got into the room because the fight was resolved by the time they reached the door. This gave them the responsibility to deal with the fight, but made it pretty unattractive to continue to fight.

3. Try to focus on each child’s strengths rather than on their weaknesses. Try giving your child tasks that allow them to show their accomplishments. Give them a reason to feel good about themselves without having to compare themselves with the other children in the family. Celebrate their uniqueness and ask them to cooperate rather than compete.

One way I have used this has been to give kids a chore or task to complete together. When left to work it out on their own, strengths and weaknesses will arise as they decide how to perform the work. They learn about themselves in the process.

4. Obviously you know that each child is an individual but sometimes it is important to verbalize it. While you may enjoy Mary’s singing voice, you also appreciate Todd’s willingness to help cook. Be sure you let them know that you love each of your children as much as the other and that you don’t have favorites; however, because each child is different you may appreciate different things about them. It may also be helpful to explain why you decided to let one child do something while the other one is told they may not.

Kids ALWAYS complain about equal treatment and this is a good time to demonstrate to them the fallacy of this thinking. Explain to your children that they have unique needs and preferences. To treat them equally all the time would deny their uniqueness. If one child is sick and needs to take medicine, would you also give the medicine to the second child because you wanted to treat them equally?

5. Encourage them when you see them doing something nice for their sibling or when you catch them playing nicely together. Sometimes hearing “It was very good of you to let your brother play the game instead of continuing to play yourself” or “Thank you for reading to your sister while I was cooking dinner when you wanted to watch television instead.”

Another way to encourage thoughtfulness within the home is to play “The Thinking of You Game.” Each week, have each family member draw the name of another family member out of a hat. During the week, the mission is to do an act of kindness for that person, without identifying yourself. At the end of the week, everyone talks about what kind things were done FOR them, and everyone tries to guess who did them.

These five strategies for helping siblings get along are by no means exhaustive. You may find some strategies work better for your family than others. Remember to use what works and toss the things that don’t. When your children understand that you are serious about their behavior and their getting along, it may be easier for them to follow the house rules and finally get along with their siblings.

If you would like to read some more ideas for helping kids learn to resolve their differences, check out my ebook, Quibbing Siblings. 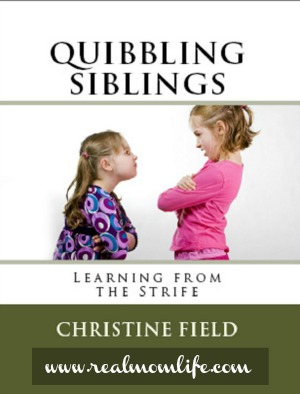 Previous Post: « 5 Ways to Take Care of Yourself During Stressful Times
Next Post: Missing my Mother-in-Law: Grandma Rose’s Scraps »