It kind of crept up on me but I have four cats again. Over the years we have been down to two, but now we are back up to four. 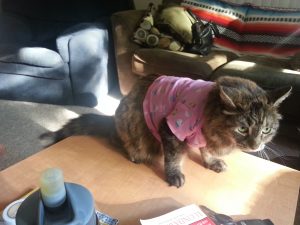 If you are a cat person, it seems to just happen that they multiply. A sad story about a poor creature with no where to go will prompt you to add yet another litter box. I only have four. My sister has seven.

My four all don’t get along. Some tolerate each other, others are growly.

My problem cat is the queen cat, Foofie. She was chosen by us several years ago when I offered a cat-as-bribe to one of the kids for something or other. Foofie seemed to need us and so she joined the family.

Greta has been with us for a while. She was also rescued by this same daughter. Greta is the only one with her front paws declawed, so that automatically gives her some issues with the other fully-nailed cats. She is a high place dweller and scowls at us from the top of the refrigerator or the shelf top.

ChiChi belonged to a sister who had to find a quick home. He’s a big, burly black cat who is afraid of his own shadow. Kind of reminds me of the scarecrow from Oz.

Kitty came home when one of the kids moved back home and had to bring this one with her. He is an older guy and very calm. After a time of adjustment, he seems to have mellowed out the other ones a bit.

Except Foofie. Her Alpha status is threatened with this new addition. While they work it out she’s been kind of obnoxious.

Over the years we have tried some strange strategies to help them all get along. A friend suggested I rub sardine oil behind their years and insisted that the scent would draw them together. It didn’t. It only infuriated them when they then needed to bathe to get the sardine stink out of the house.

We’ve tried “calming treats” but didn’t have much luck.

A few years ago, my seven-cat-owning sister had a new cat with some anxiety issues. He was eating his own fur. She saw an item called a Thunder Shirt which was supposed to reduce anxiety and calm the cat down. It actually did help her little guy to chill out.

When I shopped for the Thunder Shirt I learned that it was $40. I like and tolerate my cats, but I won’t spend $40 on an anxiety shirt for them.

With necessity being the mother of invention, I was at the store with another of the daughters and we were near the baby department. The baby onesies looked like they might serve the purpose of a Thunder Shirt and perhaps reduce Foofie’s anxiety to allow her to interact with the others without feeling so threatened.

I got a pink one. Daughter #3 hemmed it and we promptly put it on Foofie.

It initially distressed her. She kept walking backwards trying to walk out of it.

Eventually she just sighed and lay down on the carpet. She seems resigned to wearing her shirt.

Although I took it off a few hours later, something has shifted in the cat mojo. Maybe she didn’t need her anxiety soothed. Maybe she needed to be taken down a peg in the eyes of the other cats. The pink humiliation shirt seems to have done the trick.

Now when the Alpha-Apparent Mr. Kitty walks by, she doesn’t growl and glower. She just sighs.

Watch out, Jackson Galaxy. There’s a new kitty shrink on the block.