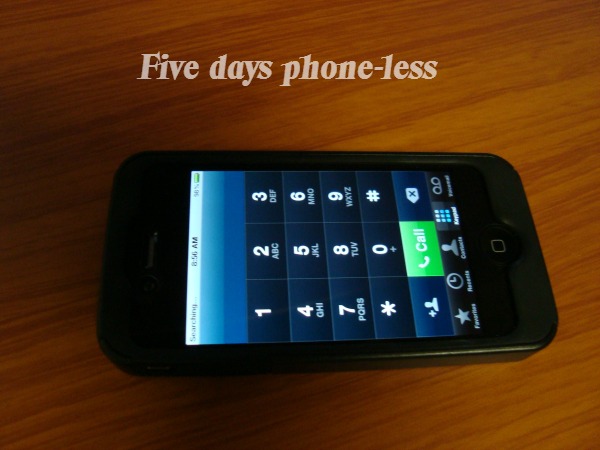 I didn’t plan to be phone-less for five days over Christmas.  The timing just happened that way.

I looked at a recent ATT cell phone bill and swallowed hard.  Normally under $100, this one was well over because we had excessively used the mi-fi capability while in Michigan winding things up with my father-in-law.  While it was logically probably reasonable, emotionally it was the last straw.

I’m not traveling as much so I no longer need fancy-schmancy phone service.   Even when I do travel, most restaurants now have wi-fi.

So what’s the point of a big service when your life is not so big?

I like my phone.  I have a Galaxy Note 2 and even though they are up to 4 now, I still like my phone.  I looked for a service where I could keep my phone, port my same number over from ATT and have a more reasonable monthly fee.

I settled on Straight Talk.  It seemed simple enough.  You go to a WalMart store, buy a transfer kit and ta-da it should be done.

In total, they ended up sending me 3 SIM cards – one to activate, one to assign a new number, one to receive the ATT number ported to the new service.  I spent more than a few hours on the phone and on Live Chat to accomplish this, but finally it’s done.  So far….so far.

It meant that I had NO phone service from Christmas Eve until recently.  A few friends did not receive timely Christmas calls, but other than that, it was … interesting.

First, I didn’t carry a cell phone for five days.  No need to.

It made me calmer.  I confess to looking at the phone pretty regularly.  I would say I am a moderate texter.  A few of my kids are super-texters.  But the reality of life is that texting is an efficient way to stay in touch.  With no texts or calls coming in, I wasn’t checking the phone every ten minutes.

I paid more attention to the people around me.  Do you know people whose faces you only see when they look up from their cell phones?  I don’t like that with my kids.  Without mom having a cell phone, we actually LOOKED at one another more often.

It’s hard to express, but a phone vacation made me feel more, well …. peaceful.  The world continued to turn, the lights stayed on, commerce continued, and Christmas came upon us – all without me having a cellphone.

It made me smile and remember the gift of being present.  It’s a gift the Lord gives to me and one that I can give to others.  It’s good.